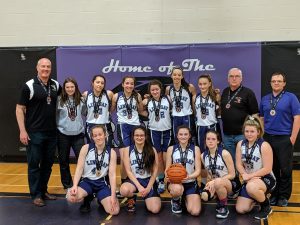 The Lindsay Wildcats U16 Girls team finished off a very successful season, earning a Silver Medal at the Ontario Cup Championships held in Ottawa.  The team had a balanced attack, posting dominant wins over Dundas (52-32), Markham-Unionville (59-28) and Orangeville (48-37), before running into a buzzsaw in the Kitchener-Waterloo Vipers, falling 54-42 in the Championship game.

The players and coaches had an incredible season, rising 4 divisions in a year to finish with a 24-5 record.  SUPER EFFORT, WILDCATS!!!